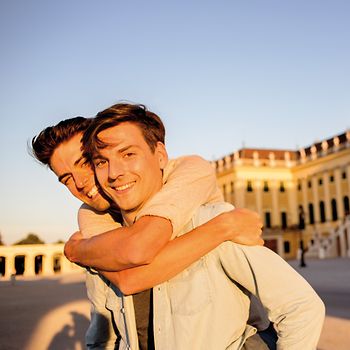 2018 Vienna was named "Destination of the Year" at the Australian LGBTI Awards.

At the Australian LGBTI Awards in Sydney, Vienna was named "Destination of the Year" in 2018. We prevailed against strong competitors such as New York City, Canada, Thailand, Las Vegas and Los Angeles. We are overjoyed, since the award proves that "Vienna has developed from ‘Hidden Hero’ to a hot spot for the LGBT community," said Tourism Director Norbert Kettner. The Australian LGBTI Awards are given in twelve categories each year.

But it’s not just Vienna that has won! Also Conchita Wurst received an award as well. She won in the International Icon category against greats such as Ricky Martin, Martina Navratilova and Caitlyn Jenner. We sincerely congratulate our Eurovision Song Contest winner of 2014!

It was only at the beginning of January that GayTravel.com, one of the world's largest LGBT travel platforms, awarded Vienna the title of Best International Destination. In 2017, Vienna was named by the world tourism organization UNWTO in its "Second Global Report on LGBT Tourism" as one of the best-practice destinations and an "iconic destination for LGBT travelers". "The current award encourages us to depict all facets of Vienna as a cosmopolitan metropolis in which diversity and all kinds of concepts of living are a matter of course," says Kettner.