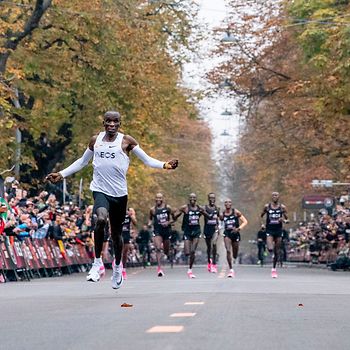 The surface of Vienna's Prater Hauptallee was positively steaming on October 12, 2019: Eliud Kipchoge – Olympic marathon winner and world record holder – became the first person to run a marathon in under two hours.

One hour 59 minutes and 40 seconds – that was exactly how long Kipchoge took to complete the 42 km-long marathon route. He set the incredible record in the "INEOS 1:59 Challenge" and is thus the fastest marathon runner in the world.

"I've showed there are no limits when you believe in yourself,"

says Kipchoge after he became the first person to break the two-hour barrier in the marathon. The run started on the Reichsbrücke, near to where the starting shot for the Vienna City Marathon 2020 will be fired next April. After a start section of about 1.2 kilometers, Kipchoge ran the rest of the distance in the Vienna Prater. He ran the full length of the completely straight and flat Hauptallee eight times up and down and was able to maintain the literally breathtaking average speed of over 21 km/h. To keep up his speed, he rounded the Lusthaus and the Praterstern at either end of the Hauptallee. Two kilometers before the end, Kipchoge rounded the Praterstern one last time and crossed the finish line right on the Prater Hauptallee in a world best time.

The runner was followed by more than 30 TV stations, which broadcast the action live in 200 countries.

If you'd like to emulate him, registration for the 37th Vienna City Marathon is already open!

Some of Vienna's golf clubs also open their fairways to non-members – as long as you ask about the terms and conditions and reserve your...

Endurance runners, die-hard hikers and passionate walkers will the best routes in Vienna all year round. The world-famous Vienna City Marathon...