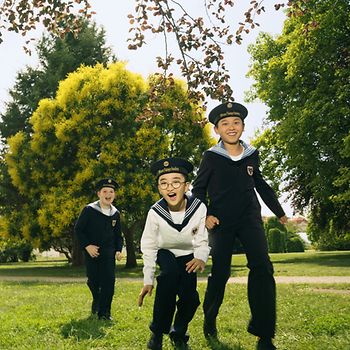 At the grand old age of over 520, the Vienna Boys Choir is the oldest boy band in the world. And with 300 performances a year, it is also the hardest-working. We had the honor of joining its ranks for a day, and seeing what four of the boys from the Schubert choir have up their sleeves.

It is a hot and action-packed day in June with the Vienna Boys Choir. We pass through a portal into another dimension. The automatic gate takes what seems like three minutes to fully open. The first impression is green, since the talented singers are based in the Augarten – former hunting grounds of the emperor. Mighty plane trees from the days of Maria Theresa provide welcome shade. The music wing with practice rooms and school is inside the 300-year-old Augarten palace, across from the sports fields and park. Right now, the Schubert choir – one of four at the Vienna Boys Choir – is practicing. The boys are rehearsing Mahler’s Third Symphony, ready for their upcoming performance at the Wiener Konzerthaus.

The choirmaster is responsible for perfecting the performance. He explains how to sing the “mm” in “bimm bamm” in the fifth movement at the right pitch – a mystery to non-experts. In another piece, the boys are singing their hearts out before he chimes in with another correction: “Not ‘Allllellluiiia’ like a Styrian! It should be ‘-uya’!” Everyone understands the Austrian dialect reference, even though the group represents a good mix of nationalities. Every now and again one of their number goes out for voice coaching with Boys Choir director Gerald Wirth. The one-on-one sessions call for the utmost concentration. It is incredible how the experts’ tips translate into audible improvements in just seconds. The choir also uses the two-hour practice session to continue working on Haydn’s Missa in tempore belli, ready for Sunday mass at the Hofburgkapelle.

We love to sing

During their break, four members of the Schubert Choir talk about their lives: The oldest, Laurin, will have to leave in the summer. He grew up 70 kilometers away from the capital and has always had an affinity with the Vienna Boys Choir – three of his brothers were members before him. Laurin is a fan of touring and talks about the time he has spent in Germany, China, Australia, and Taiwan. One of his favorite places to perform is the nearby MuTh – a state-of-the-art concert hall with excellent acoustics, located at the adjacent Augartenspitz, which hosts Friday afternoon concerts and children’s operas.

Julian from Hong Kong has traveled the farthest. He once heard the Vienna Boys Choir in his homeland and was hooked. After workshops and a practice week at home, he went on to fulfil his dream. When asked what it is that defines a member of the Vienna Boys Choir: “We all like music. We love to sing.” Hardly surprising, but plain to see here.

Yun-Jaes’ story has striking parallels: a concert tour sparked the South Korean’s passion. When he arrived at the tender age of ten, he couldn’t speak a word of German or read the Latin alphabet. “But he’s a really fast learner,” confirms Theo at his side. He is proud of his friend. Warm-hearted Theo is from Vienna. His ear for music first attracted attention at kindergarten. On tour, he loves the free time: “You get to see a lot of the host country. We also go sightseeing. We went to Disneyland Shanghai and visited an amusement park in Taiwan.”

A little bit of everything

He talks openly about his favorite music. “Some pieces are difficult and a bit on the boring side. But that’s quite rare. Mostly we sing exciting and fun songs such as polkas and waltzes. By Johann Strauss. As well as contemporary songs, and Baroque and Renaissance works. From the old to the new. A little bit of everything.”

A glazed walkway leads from the Augarten Palace to the modern extension housing the boarding school where the boys sleep, eat, do arts and crafts and play sports in the private swimming pool. Fixtures on every floor include a drinking fountain and a table with food to keep hunger pangs at bay. At lunch the boys burst into a spontaneous rendition of Happy Birthday. In perfect harmony, of course.

In the tailoring shop Laurin, Theo, Yun-Jae and Julian put their uniforms on specially for us: the blue gala uniforms and the lighter white ones. Next to the door is a box with the word ‘Reserve’ written on it, containing the uniforms for the tour – including an emergency variant with a zip on the sleeve so that a plaster cast can fit through.

In the park the boys pose for the photoshoot with no small amount of dynamism. They are clearly enjoying themselves, jumping, running, screeching to a halt – the photo­grapher almost gets knocked over.

On the sports field they get to play basketball, and water polo is included in the program in the swimming pool. In woodworking class the boys are busy making large chess pieces using chisels, saws and files. Seeing our concern they jokingly say: “You don’t need hands to sing.”

In their physics lesson they learn about sound. They discuss why the wind can carry something away, making it quieter. In the meantime, one of the pupils shows that he can recite pi to 30 decimal places – clearly they are a talented bunch.

Music, today focusing on rhythm, is the last lesson of the day, and the four wish us a warm farewell – it is time for dinner.