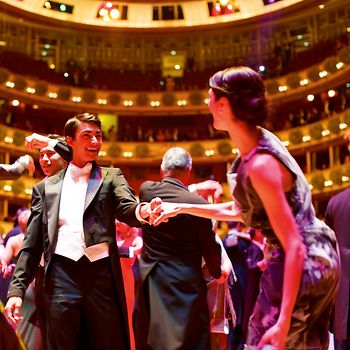 Music for all the senses

Every night great things happen on around 120 stages in the capital, and each year around 15,000 music events cover just about every genre imaginable. But music in Vienna is not just a pleasure for the ears – it brings all of the senses into play.

Hearing is the first to be reached by music, primarily at the capital’s music theatres and concert halls. The sheer range is incredible – it is no accident that Vienna is fêted as the world’s music capital. Opera fans will be treated to performances by some of the genre’s biggest names at the Vienna State Opera. Although the only venue in the city dedicated to the light-hearted, colorful and enthralling world of operetta, the Volksoper also hosts its fair share of operas, musicals and ballets. The Theater an der Wien, the city’s newest opera house, focuses on high-end Baroque and contemporary opera with modern sets. Mozart’s works are a regular fixture. It follows a stagione (Italian for season) system with premieres almost every month, as well as concerts and dance performances.

Fans of classical music can listen to some of the best musicians in the world perform live, including the Vienna Philharmonic, the Wiener Symphoniker and the Radio Symphony Orchestra Vienna. And there are a variety of festivals which focus on specific musical genres, right the way through to the present day. The city’s two main stages for musicals, the Raimund Theater and Ronacher, are another pair of entertainment hotspots.

Enjoying music in Vienna is about much more than pleasure for the ears – there is also plenty for the eyes to feast on: it’s well worth taking a closer look at the capital’s music venues. The Vienna State Opera is a gem of Neo-renaissance architecture, even though it was initially dubbed a “sunken crate” and “supine elephant” by some when it opened in 1869, in response to its low positioning relative to the Ringstrasse. A guided tour gives a fascinating glimpse into life behind the scenes at the world’s largest repertory opera house: starting at the foyer, it takes in the grand staircase, the state rooms (the Tea Salon, Marble Hall, Schwind Foyer, and the Gustav Mahler Hall), and the auditorium with views of the stage.

A tour of the Musikverein is equally recommended. Opened in 1870, the crowning glory of this historicist temple to the muses is the Golden Hall, which has superb acoustics as well as the honor of being one of the world’s most attractive concert venues. It is here that the Vienna Philharmonic gives its annual New Year’s Concert.

Aficionados can also pay house calls to see the charming original apartments owned by some of the great geniuses of the ages. Well and truly out in the suburbs in his day, Haydn’s modest house has long since been subsumed by the growing city, with busy shopping street Mariahilfer Strasse now just around the corner. Johann Strauss’s apartment still exudes cosmopolitan style, and the Mozarthaus Vienna in the heart of the old town has been expanded and transformed into a Mozart experience. The Beethoven Museum, which opened in 2017, is dedicated to the great composer’s 35 years in Vienna. Accredited Vienna tour guides offer a wide variety of guided tours on various musical themes, with no end of anecdotes thrown in for good measure. But anyone that prefers to go it alone can follow the descriptions that accompany the city’s musician walks.

Beautifully crafted instruments once played at the imperial court by musicians such as Beet-hoven and Chopin are preserved for posterity in the Collection of Historic Musical Instruments in the Hofburg – a veritable treasure trove for music lovers. The zither on which Anton Karas played the score for silver screen classic The Third Man is another of the attractions.

Rhythm, beat, sound, melody – the ingredients that make up music trigger make themselves felt in every sense of the word. Such as when clubbers feel the deep bass sounds run through their bodies on a night out. Dancing like there is no tomorrow is all the rage at the capital’s discos, clubs and festivals. But dance partners can also tune in to the music on a different level at Viennese balls where the waltz, foxtrot, jive and samba set the scene. An experience for all the senses!

The only thing missing is a music-related taste sensation: but even that angle is covered thanks to the mighty Mozartkugel confectionery which has taken the world by storm with a taste of Mozart, in name at the very least. It is easy to see why the Mozart brand is valued at around EUR 5 billion – everyone knows Mozart. And a lot of people love chocolate, nougat and marzipan. Not to be outdone, the King of the Viennese Waltz lends his name to the Johann Strauss Taler chocolate coins. Many other musical geniuses live on in chocolates or have lent their names to a wealth of cakes, pastries, liqueurs and schnapps. And why not?