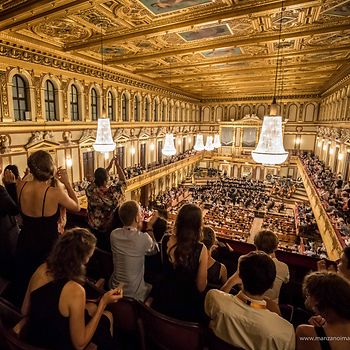 1,500 young choristers and musicians from around the world come together in the musical city of Vienna. They sing and play in the most beautiful concert halls - in the Golden Hall in the Musikverein, in the MuTh and in the Konzerthaus - from 5 to 10 July.

The young artists will also perform in the neighboring federal provinces and countries. Anyone who walks through the city during the festival may chance across groups of music-loving young people, laughing, chatting and getting to know Vienna.

The first gathering takes place in Vienna's St. Stephen's Cathedral, where all the young people come together to be musically greeted. In the days that follow, there will be public concerts in such venues as the Musikverein, Wiener Konzerthaus, House of Music and at the MuTh. Music workshops will take place at the University of Music and Performing Arts Vienna.

Concert series at the MuTh: Go, listen and be amazed by the enthusiasm and professionalism of the participants! From July 6 to 8, choirs, music groups and bands will perform at 11 am, 3 pm and 7 pm at the MuTh - the concert hall of the Vienna Boys' Choir. For example on July 6 in the evening: the Kammerensemble Violinissimo (D) and the Jugendsymphonieorchester Tulln (A) with the French violinist Esther Abrami. The second half of the concert is dedicated to film music. Right next door to the MuTh, the Augarten offers pure relaxation and culinary delights.

The highlight of the festival is the music competition with an international jury at the Golden Hall at Musikverein on July 6 and 7. The winners will demonstrate their considerable talent at the festive closing concert at Wiener Konzerthaus on July 9. A relaxed party is also held at Vienna City Hall after the ceremonial prize-giving.

The Arena in Vienna Erberg is a fixed point in Vienna’s event scene and a site of subcultural history. Punk bands, trendy pop groups, music...

The mdw – Universität für Musik und darstellende Kunst Wien (University of Music and Performing Arts Vienna) is one of the world's leading...