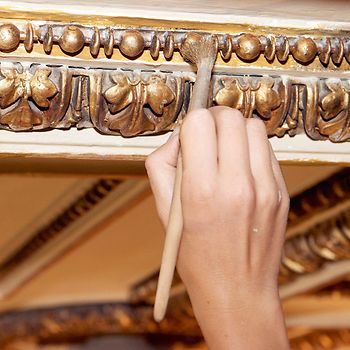 Opera back to its best

Vienna State Opera is set to shine like never before, thoroughly spruced up for its 150th anniversary season. Manuela Fritz has played no small role in this, working with a ten-strong team over five months to painstakingly restore the vestibule, inch by inch.

“I grew up with stone,” Manuela Fritz explains. Her parents ran a stonemasonry business in Styria – so she was surrounded by the material as far back as she can remember. Her education took her from an academy of fine art to studying restoration in Italy. Today, she is one of the best in her profession, as well as a prolific freelance sculptor.

More than a job

In the State Opera, Manuela Fritz and her team were responsible for restoring stucco, scagliola (imitation marble), stucco lustro (marble-effect plaster) and gilding. The goal of the project was to return the interior to its original state. The building’s color scheme once flowed seamlessly from the outside to the interior: from light natural stone to light ocher with gold inlay. Now, the era of the “dark cavern” is over.

It took one and a half weeks just to mix the right colors – each test coat had to dry before inspection, and comparing the new finish with the original tones was not made any easier by the artificial light mounted on the scaffolding. Work like this is demanding, both in terms of the concentration required and the physical strain. “Only Michelangelo lay down to paint. We stand,” Fritz laughs. The restorers often had to work on spaces above their heads. Tasks were strictly divided up within the team – each member remained focused on their particular area: filling gaps, sanding, re-casting, cleaning with a brush and cotton swabs, stabilizing, painting, ...

For example, the marble-effect painting was all done by Manuela Fritz – one of her favorite activities, and highly individual in execution: it would be easy to see if someone else had worked with her.

Most of the damage in the vestibule was caused by condensation. That said, in some places it also appears that regrettably, unscrupulous visitors to the opera have taken it upon themselves to break off little souvenirs. Tellingly, this particular type of damage does not extend beyond arm’s reach.

Manuela Fritz is a patron of Wamprechtsamer, a Viennese gold leaf producer that has been beating the precious metal into wafer-thin leaves since 1906. The final stage in the beating process is still done by hand. This Viennese gold shines on the statue of Athena in front of the Austrian Parliament building, in Schönbrunn Palace and on the Kaiser­kreuz cross at the summit of the Grossglockner, Austria’s highest mountain. Mr. Wamprechtsamer can still remember when he was a child and his father delivered gold to the State Opera with a horse and cart. Today, Manuela Fritz collects it. The material value of the gilding in the opera house is considerable, since most of what glitters is real gold. The gold leaf is applied to a surface coated in an oil-based film, which must have exactly the right adhesive consistency – correct timing is crucial, otherwise the gold will “drown”.

“In a project like this, you develop a relationship with the things you shape,” Manuela Fritz believes. “I always go back to visit them – ‘my’ objects. That includes the State Opera – every so often, I take a walk around inside it. And I have to laugh when – in vain – I look for two points high up on the ceiling that I corrected after the scaffolding had been taken down, using an eight-meter-long brush. I did it!”