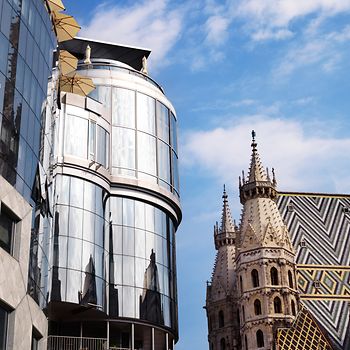 The Haas House, in whose facade one can see the mirror image of St. Stephen's Cathedral, was designed by star architect Hans Hollein. The building is in stark contrast to the historic buildings in the center of the old city and was originally conceived as a department store.

The curved facade of the Haas House with its round oriel window and its projecting roof create a connection to the neighboring buildings.

Today, one part of the Haas House consists of a hotel, a restaurant, and a café; the other part is four floors of a sales room for an international fashion chain.