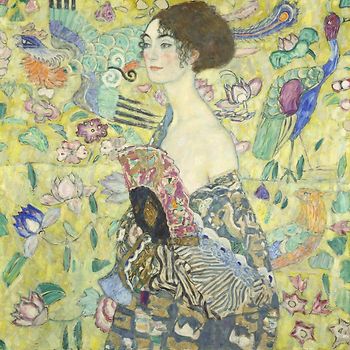 The last, largely completed painting by the Viennese artist icon Gustav Klimt can be seen again in Vienna after more than 100 years. The Belvedere is showing "Lady with Fan" as part of a special exhibition on the final phase of Klimt's work.

It was the last picture that Gustav Klimt (1862-1918) worked on in his studio in Vienna-Hietzing in 1917. Apart from a few details, the co-founder of the Vienna Secession was able to complete Lady with Fan before his death. It shows one of Klimt's favorite subjects – a "beautiful Viennese woman". However, not some society lady – a frequent motif in Klimt's work – but a supposedly unknown dancer, looking confidently into the distance and holding a fan in front of her upper body. In any case, this is "unadorned Klimt": because the work was never covered with the special protective layer, the varnish, usually found on oil paintings.

The painting, which has now returned to Vienna for a while for a special exhibition at the Belvedere, has a moving journey behind it. To date, the Lady with Fan was accessible to the Viennese public just one single time: in 1920, in an exhibition in today's MAK – Museum of Applied Arts, Vienna. Art collector Rudolf Leopold (founder of the Leopold Museum) owned the painting for a while. In the 1980s and 1990s, it was exhibited in Tokyo and Krakow, before it was auctioned off in New York in 1994. It was never explained whether its removal from Austria was even legal. In order to bring it to Vienna, the Republic of Austria granted the anonymous foreign owner immunity from prosecution.

The first part of the exhibition focuses on Klimt's late, unfinished works. Apart from Lady with Fan, other works on display include The Bride, Portrait of Amalie Zuckerkandl, Adam and Eve and Portrait of a Lady in White. The second part of the show will open in October: Klimt's affinity with East Asian art styles.

It's starting up again: a diverse series of exhibitions in Beethoven year 2020 presents the various facets of the brilliant composer's life and...

What do art and medicine have in common? A lot, as shown by a new exhibition at the Leopold Museum. "The Body Electric" is dedicated to works by...

Carefully wrapped, hung on wire mesh, and meticulously ordered. Come with us to a place that is normally only accessible to a select few. A place...