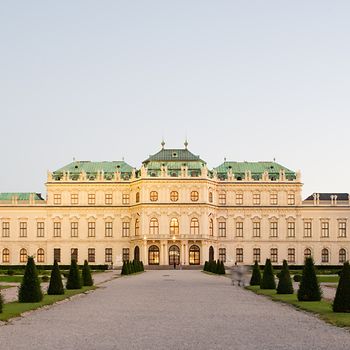 Pomp and finery have always been used to proclaim and signify power. Vying to outdo each other, the Viennese nobility and clergy built impressive Baroque palaces as an expression of their superiority.

Vienna not only eagerly adopted pizza and espresso from Italy – Baroque architecture is another famous Italian import. Unashamed opulence and sweeping curves are the defining characteristics of this era, which dawned in Vienna with the counter reformation around 1600 and reached its peak in the eighteenth century with a late-Baroque building boom. Everyone in the imperial capital who was anyone commissioned the leading architects of the day to build palaces, mansions and churches for them. The services of Johann Lucas von Hildebrandt and Johann Bernhard Fischer von Erlach were in particularly high demand. The former started work on Prince Eugene’s Upper Belvedere Palace in 1717, a hilltop monument to prosperity that has lost nothing of its majesty over the centuries. The Upper Belvedere palace, gardens and Lower Belvedere – as well as the palace’s world-famous Klimt collection – form a Baroque Gesamtkunstwerk, or total work of art.

Vienna’s best-known Baroque church was commissioned by Karl VI. Commonly referred to as the Baroque Emperor, Maria Theresa’s father built the Karlskirche (Church of St. Charles) from 1716 to thank divine providence for delivering the city from the plague. Contrary to most assumptions, the place of worship takes its name from a different Charles, Charles Borromeo, the saint famed for his work during the plague. The ceiling paintings by Johann Michael Rottmayr are definitely worth a look, and thanks to the panorama lift visitors can inspect them up close. It took more than 20 years to complete the church, which like so many other Baroque edifices in the capital, was a monument to the Habsburg’s secular and spiritual clout. Not only did they successfully stem the tide of Protestantism, they also broke the Turkish siege in the 1683 Battle of Vienna.

From chicken run to the MuseumsQuartier

Karl VI also commissioned the construction of a Baroque stable complex near the Hofburg in 1713. The imperial poultry farmstead was singled out to make way for the new development, which would accommodate 600 horses and 200 carriages. Now free of horses and without a chicken in sight, it has been given a new lease on life as the Museums-Quartier, one of the world’s largest arts and culture complexes, and home to Klimt, Schiele, Warhol and comfy outdoor furnishings. The Leopold Museum, mumok, Kunst-halle Wien and Architektur-zentrum Wien share the space with bars and chillout zones.

But the Spanish Riding School is still the home of haute école horsemanship to this day. Performances by the world-famous Lippizaner stallions are hosted in the Baroque winter riding school (1729-1735). And the opulent Grand Hall of the Austrian National Library (1723-1726) contains books from the former court library and Prince Eugene’s private collection.

In terms of magnificence, Liechtenstein City Palace in particular is hard to beat. Started in 1691, it is prized as the capital’s oldest major example of high Baroque architecture. The property was fully renovated a few years ago for an eye-watering 100 million euros. The two upper floors of the building contain one of the most impressive Baroque grand staircases to be found in Vienna. Finished in the Neo-Rococo style, the state rooms feature parquet flooring from Thonet and heavy chandeliers that have lost nothing of their luster. Princess Nora Fugger wrote in her autobiography (published in 1932): “For beauty and grandiosity, the palace is unmatched in the whole of Europe.” Which would not have been music to the Italians’ ears.