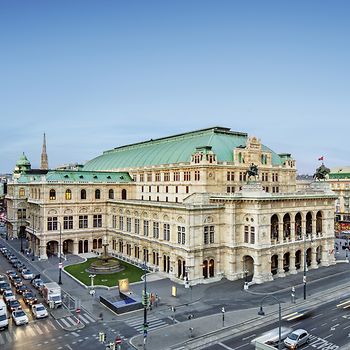 Starting at the Vienna Opera, our second gay historic city tour leads you to the Imperial Palace, Providentia Fountain and Neuer Markt.

Our second tour starts at the famous Vienna State Opera that was built by the architects Eduard van der Nüll (1812– 1868) and August Sicard von Sicardsburg (1813–1868) who were partners in business and in life. Unfortunately, their relationship came to a tragic end and that had to do with the construction of the Opera. When they started their planning, the level of the forthcoming Ringstrasse had not been set, and as the street level was later raised by one meter, the optical effect on the State Opera was unfavorable: It looked (and still looks) as if it had sunk into the ground. Which is also why the ramps on either side do not really qualify as ramps.
As public criticism mounted (supposedly even Emperor Franz Joseph expressed his disapproval), van der Nüll – always on the depressive side – committed suicide on April 3, 1868. Only ten weeks later, on June 11, Sicardsburg died too, apparently of a “broken heart.”

We leave this historic place and stroll along the Ringstrasse over to the Imperial Palace (“Hofburg”), where the impressive equestrian statue in front of the entrance to the National Library depicts the great short Prince Eugene.
Walking through the Volksgarten, we reach the so-called “Theseustempel” built in 1820 by Antonio Canova. The statue of the antique hero Theseus can now be found at the bottom of the staircase in the Museum of Fine Arts.
In front of the temple the bronze sculpture “The Winner” will catch our attention. It was created by Josef Müllner in 1922 and destined to be one of the “gay monuments” of the city.

Nevertheless, we turn around and go back to the Imperial Palace and pass the Inner Courtyard, where the colossal statues “Four great deeds of Heracles” flank the passages of the so-called Reichskanzleitrakt. These muscular sculptures surely impressed the gay younger brother of Emperor Franz Joseph, Archduke Ludwig Viktor (1842–1919), who was tenderly called “Luziwuzi” by his friends, and who was commonly known at Court for his malicious tongue and his faible for women’s clothes.

He frequently visited the “Centralbad” (today the Kaiserbründl bathhouse) and caused a big scandal when an officer of the Austrian army slapped him in the face after Luziwuzi had made advances. Due to this incident his brother and emperor exiled him to Schloss Klessheim near Salzburg, where Luziwuzi died mentally deranged in 1919.

We keep on walking gaily forward on Vienna’s most exclusive shopping streets, the Kohlmarkt and the Graben. This route takes us right to the center of the city, to Stephansplatz with the world famous, St. Stephen’s Cathedral. This church is generally seen as Austria’s most important gothic building. Our walk follows Kärntner Strasse for just a few meters (to our left in Weihburggasse, we could take a detour to the above-mentioned infamous Kaiserbründl bathhouse) and finally the tour takes us to Neuer Markt, which is dominated by the so-called Providentia-fountain by the baroque sculptor Georg Raphael Donner (1693– 1741).

Donner, who was commissioned with this project in 1737, surrounded the central figure of Providentia (“providence”) with four personifications of the tributaries to the river Danube in Lower Austria. The river Enns is depicted as an old ferryman, the river March as a mature woman, the river Ybbs as a juvenile fountain-nymph. Only the river Traun is a gorgeous looking young man, who bends with his trident over the rim of the basin, preying on fish. With the fabulous backside of this lad — very inspiring for today’s gay looks — we have finished our city walk.