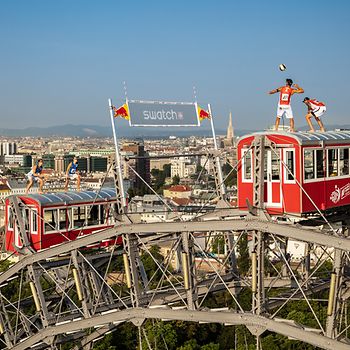 Vienna is set to become the hotspot of the international beach volleyball scene again. At the second Vienna Major in the city, the world's best beach volleyball players will deliver thrilling moments on Danube Island from July 31 to August 4.

After the huge success of the FIVB Beach Volleyball World Cup in 2017 and the first Vienna Major in 2018, the world elite of beach volleyball will return to the top location of Danube Island in 2019. For the second time, Vienna will host the Beach Major Series, which brings international beach volleyball stars onto the playing field. The Beach Volleyball Major in Vienna has meanwhile become the summer sporting event of the year.

Thousands of volleyball fans visit the "Beach Village" on Danube Island. Just as hot as a Viennese summer is the gripping atmosphere in the "Hexenkessel" (witch's cauldron), as the grandstand specially erected for the Vienna Major is called. A good atmosphere in the stadium is created with loud music and an interactive program during the short breaks.

The world's 32 best international women's and men's beach volleyball teams play in the matches and are cheered on by the spectators. The preliminary round matches are played on several courts. The women's final is on the Saturday, while the men go for the gold medal on the Sunday.

2,500 tons of sand on Danube Island create not only the perfect beach volleyball conditions but also an urban beach feeling in the "Beach Village". Those who prefer to follow the match on a giant screen will find just what they want in the public screening area. After the games, DJ sounds can be enjoyed on the large area for culinary tastings plus pool and bar in the chillout zone.

Vienna has enough locations to offer everyone who still wants to stroll about the city after the matches.

Access to the event site is essentially free of charge until full capacity is reached. The 8,000 seats in the stadium are available on a first come first served basis. Anyone wanting to have a guaranteed seat (free choice) in a reserved sector for the Medal Matches (Saturday or Sunday) can buy Medal Match tickets for it [in advance at LINK]. Various VIP ticket categories (Diamond Lounge, Beach Majors Club, Beach Friends Lounge) are also offered.

Getting there by Vienna public transport

The event site is located between Floridsdorfer Bridge and Brigittenauer Bridge and the entrance can best be reached by public transport via Handelskai station.