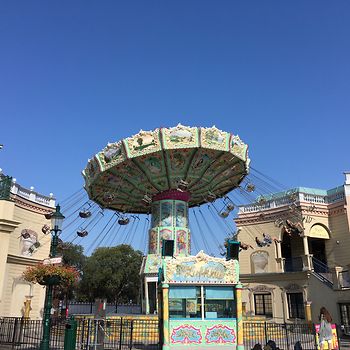 Nostalgia in the Prater

It was a long way from the former river landscape on the Danube to today’s leisure and entertainment center. Many rides in the Prater are still reminiscent of times gone by.

As early as 1403, the "Pratter" appears in official documents. In 1766, Emperor Joseph II donated the area to the Viennese as a public leisure center. Restaurateurs and coffee houses quickly move in. Swings, carousels and bowling alleys follow. The World Exhibition of 1873 on today's trade fair grounds also gave a great boost to the Prater.

Where the Waltz King Performed

In 1895, the amusement area "Venice in Vienna" was established with winding canals, in whose midst one of the landmarks of the city, the Giant Ferris Wheel, appeared in 1897. The Prater became a place of entertainment for all: "Hutschenschleuderer” (swing pushers) and curio collections compete for the audience's favor. Heuriger singers and ladies' bands perform their melodies just as well as waltz king Johann Strauss or the operetta composers Joseph Lanner and Carl Michael Ziehrer.

With the mechanization of the Prater over the course of the 20th century, more and more modern amusement rides, which were state-of-the-art at the time, were introduced. Some of them are still preserved today, such as the Vienna Hochschaubahn, tucked away in a corner behind the Schweizerhaus. Chair-o-planes, historic grotto railways and aging ghost trains provide the necessary nostalgic flair. The journey into the past can be continued in the Prater Museum near the Giant Ferris Wheel.