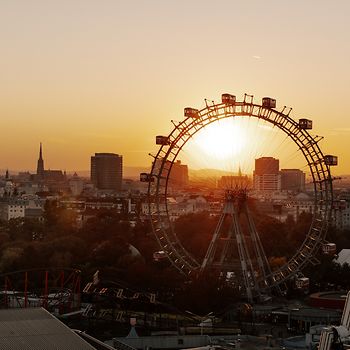 A bedrock of Viennese life has been set in motion again in the Prater and is finally making its usual unhurried rounds. The Giant Ferris Wheel currently represents the city starting up again like no other symbol. But did you know that a horse once went around the Giant Ferris Wheel on top of one of the cars? Here are the ten funniest facts and figures about our Giant Ferris Wheel. So off we go, let's turn a round!

The two English engineers Walter Basset and Harry Hitchins designed Vienna's Giant Ferris Wheel so that it can be operated by hand in the event of a power outage.

The Giant Ferris Wheel originally made its rounds with 30 cars. After the Second World War, however, only 15 were hung in place for safety reasons. This gave the people of Vienna the impression that the wheel had gaps in its teeth, in other words "gap-toothed".

The Giant Ferris Wheel's metal components weigh around 430 tons altogether. So the old lady has some pretty good covering on her ribs.

The Giant Ferris Wheel is perfectly arranged in line with the four points of the compass and turns precisely in the north-south direction. When it turns, it serves as a very good aid for orienting yourself.

The Prater and in particular the Giant Ferris Wheel were and still are popular film backdrops. From classics like "The Third Man" (1949) to "James Bond 007 – The Living Daylights" (1987) and the coming-of-age story "Before Sunrise" (1995), there has hardly been a film that hasn't used the Giant Ferris Wheel as a secret leading actor.

7. No sooner said than done

And while we're on the topic of film: a restaurant was built in an instant at the base of the Giant Ferris Wheel for a scene in "James Bond 007 – The Living Daylights". This so impressed Vienna's residents that just a short while later, a restaurant really was built right on that spot!

8. Dinner with a view

It doesn't get any more romantic: what about a candlelit dinner at lofty heights? No problem in Vienna's Giant Ferris Wheel. Each course is brought out just as the car reaches ground level.

In 1914, a French trick rider rode around the Giant Ferris Wheel on a horse for a film. Huh? What? Yes, she stood with the horse on the roof of one of the cars. A sensation, then as now.

Gemütlichkeit is law in Vienna. Which is why the Giant Ferris Wheel also makes its rounds at a leisurely pace. With a top speed of 2.7 km/h, it takes about 4 minutes to complete one round, but only when it does so in one go, of course. On average, a ride takes about 12-15 minutes.