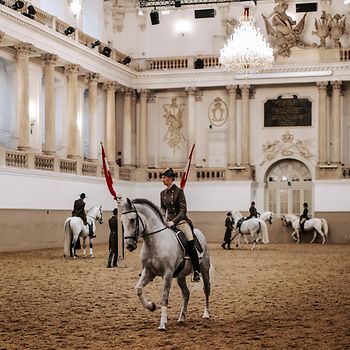 The ballet of the white horses fascinates children as well: the Lipizzaners of the Spanish Riding School and their riders perform unbelievable dressage tricks in the Baroque Imperial Palace.

The Spanish Riding School in Vienna is the oldest riding school in the world. Only here has classical equestrianism been fostered unchanged in the tradition of the "noble art" for over 450 years. The famous stallions belong to the Lipizzaner breed and are raised on the Piber stud farm in Styria.

For those who get along in German: During special guided tours for children in German language, horse fans from 6 to 12 years of age learn interesting facts about history, riding tradition and above all about the stars - the Lipizzaners. It also goes behind the scenes: into the tack room with the golden bridles and into the stable to the horses.

You will learn what dark stallions are all about and why they are lucky charms, what a horse scale looks like and why some stallions are on a diet. Maybe you will also meet one of the stable cats that like to take a nap on the cuddly horse blankets in the tack room.

A varied program is organized at the Spanish Riding School in Vienna throughout the year. The performances in the Baroque Winter Riding School - perhaps the most beautiful riding school in the world - are accompanied by classical Viennese music. Children can attend from the age of three years and even sit for free on their parents' laps up to six years of age.

At the breathtaking Gala Performances of the "white ballet", the stallions give their best. The ardent, often still gray young stallions enchant the audience just as much as the school's fully trained stallions. The white stars perform in the school's quadrille, in the schools on and above the earth, in the pas de deux and on the long rein.

The Training with Music is the daily training session of the riders with their Lipizzaners. The famous school jumps are not trained every day in order to protect the animals and can only occasionally be seen during the Trainng with Music.

Where do the elegant horses come from? What are their lives like before their training and performances in Vienna? Questions such as these are answered in the program Piber meets Vienna, which takes place during the well-earned summer break of the school's stallions. That's when the Lipizzaner mares and their delightful foals come to Vienna for a visit.

Nowadays, Vienna's biggest Beethoven Museum presents the composer in a modern exhibition sequence through 14 rooms. Beethoven lived in this...