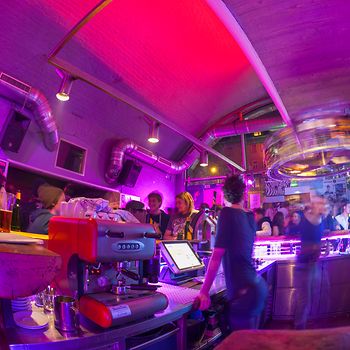 One of the hippest venues on the Gürtel beneath the U-Bahn. The two-storey club glitters with its exciting live program and the well attended DJ evenings.

The B72 is situated in two U-Bahn arches on Vienna's Gürtel in the vicinity of U6 station Alserstraße . The musical program does not have quite the same British focus as the nearby Chelsea, but is similarly based around guitars. On offer is a cross-section of the alternative music scene with live performances by Austrian and international bands and well established parties.

The special thing about B72 is that it occupies two storeys. Downstairs are two bars, a stage and a dancefloor. On the balcony is a chillout area furnished with tables, chairs and sofas - from where there is also a good view of the stage. In summer, there is a cozy guest garden behind the B72, which also invites people to linger awhile. The crowd is mostly young and interested in music. The furnishings are elegant and create a pleasant atmosphere between club and concert venue.

In the heart of the bustling city center, in the nightlife area known as the "Bermuda Triangle", is one of the city's best cocktail bars - tucked...

Vienna has many wonderful markets where you can enjoy watching a bustling market. We took a closer look at six of these.

Treat your family to a tour of the cathedral, Austria's most celebrated Gothic building.