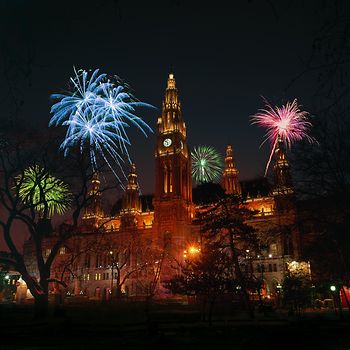 At the change of year, the whole of Vienna is given over to celebrating. The sounds of waltzes hang everywhere in the air. High spirits abound at gala dinners, in concert halls, at the opera or in chic bars.

Due to COVID-19, cultural and leisure facilities such as theaters, concert halls, cinemas and cabarets, as well as all restaurants and hotels are closed even on New Year's Eve.

Normally, the entire city center transforms into a giant party site on December 31 for the New Year's Eve Trail. Because of Corona, this Viennese institution must take a break this year.

A unique New Year's atmosphere can also be enjoyed on a boat trip along the Danube and at New Year's Eve galas held in luxury hotels. The "Majestic Imperator", an imperial luxury train, invites everyone to go on an exclusive ride into the new year, while "Die Fledermaus" by Johann Strauss is performed in time-honored tradition at the Vienna State Opera.