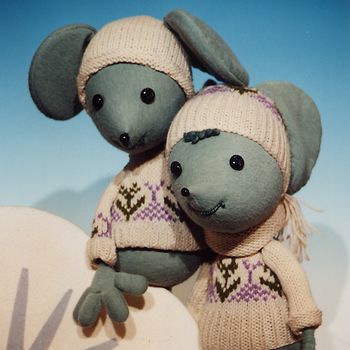 Take the stage! Dive into the world of spoken and dance theater, puppet and marionette play and cinema. Be enchanted by the very best in acting.

“Cinemagic” is a special cinema program for young film lovers. It offers children’s film performances on the weekends, during vacation time and on public holidays. The array of valuable films ranges from turbulent cartoons to award-winning children and youth film productions, filmed works of literature and many others. An annual highlight for film freaks of all ages is the International Children’s Film Festival. www.cinemagic.at

A turntable for art and culture, the emphases of the program is theater, a dance festival for children and young people, international guest appearances - presented with drama, dance, figure and object theater, pantomime and much more. Every weekend there is a family program.
More information on the program:
www.dschungelwien.at

Kabarett Niedermair has established itself not only as a cabaret theater, but also as a production site and performance venue for children's theater. Productions of children's book classics such as "Karlsson vom Dach" by Astrid Lindgren or "The Adventures of Petterson and Findus" by Sven Nordqvist delight young and old. There are also frequent guest performances by the children's theater groups Marko Simsa, Pipifax, Bernhard Fibich, Theatro Piccolo and Schneck and Co. Theater performances for children from three years of age. (Children's theater closed from May to September).
www.niedermair.at

Vienna's largest theater for children has been performing puppet shows for children from 3 to 10 years old as well as for adults since its founding in 1980. The style of its founder and artistic director, Traude Kossatz, strongly influences the repertoire, which has developed into a trademark over the years. Austria's largest hand and stick puppet stage has been based in Vienna's 3rd district since 1997, where it puts on about 370 performances a year for approximately 40,000 visitors. The program focuses on the theater's 25 in-house productions, while national and international artists are regular guests at the LILARUM.
www.lilarum.at

In the Stadtsaal, Vienna's biggest variety theater, evenings with the stars and next-generation talent of the Austrian cabaret scene are on the program alongside theater works for very youngest audiences. These include shows for children from 4 years of age, some with live music for even more excitement!

Venues are the Renaissancetheater (7., Neubaugasse 36) and the Theater im Zentrum (1., Liliengasse 3).The productions are suitable for children and young people from 6 years of age.
www.tdj.at

The glorious moments of stage magic are captured for eternity in the baroque Palais Lobkowitz, near to the Imperial Palace. The collections of the Theatermuseum house almost 2 million objects, including mementos of famous actors, authors and composers, numerous costumes as well as marionettes and shadow figures. Numerous special exhibits and a full program for children that playfully explains to them the world of the stage, provide liveliness in keeping with the theater.
Tue-Sun 10.00 am to 6.00 pm

Vienna is appreciated by its visitors for being a safe travel destination. The city guarantees high safety and cleanliness standards – now also...

Music plays in Vienna. Including in Vienna's hotels, which have all sorts of connections to the music scene. Here are a few stories, from Billy...

The Vienna International Centre (VIC), known locally as UNO City, is one of the four official headquarters of the United Nations, along with New...