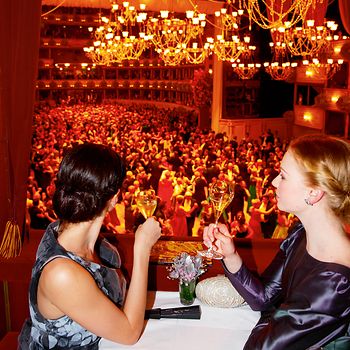 Since the Congress of Vienna, the city of waltzes has been famous for its legendary balls. Each year more than 450 balls take place in Vienna. The city celebrates Carnival in January and February with exuberance. The three-four rhythm is also joined by more contemporary sounds, offering enjoyable dancing for every taste.

Due to the current Covid-19 situation, the Vienna Balls were cancelled for the winter 2021/2022.

The best time of the year begins for ball-goers and dance fans on November 11. The Vienna ball season starts punctually at the beginning of Carnival with public dancing of the waltz in the city center. The Vienna ball season reaches its peak in January and February. The old tradition of Carnival balls continues to thrive in the city. While some dancers enjoy following the three-four time of the waltzes, others may prefer letting loose to a disco beat.

Each year, the Ball of the Viennese Chimney Sweeps kicks off the ball season. If you're wondering about this ball: in Vienna, it is quite normal for virtually every professional guild to have its own ball. They range from the Confectioners' Ball to the Ball of the Weightlifters.

An especially large number of balls are held at the Imperial Palace in Vienna. These traditional balls adhere to a festive ceremonial pattern. The ladies appear in a long evening gown, the men wear a tuxedo or tails. Young ladies in white dresses and their gentlemen open the ball with a polonaise; the rest of the visitors are only allowed on the dance floor after the proclamation "Alles Walzer!" (Let the waltz begin!). Further show acts and interludes give structure to the night. This includes the popular "Fledermaus" quadrille by Johann Strauss. This is performed by the public to the instructions of a dance master and ends to everyone's amusement in a complete muddle.

May we have the next dance?

On New Year's Eve, guests dance into the new year in a magnificent setting at the New Year's Eve Ball at the Hofburg Vienna (Imperial Palace). At the Hunters' Ball, guests appear at the Imperial Palace in festive costume. The Vienna Coffeehouse Owners' Ball is considered to be one of the most atmospheric. The Opera Ball at the Vienna State Opera has long been legendary. On this day, visitors have the unique opportunity to see the famous opera house on the Ringstrasse boulevard not only from the spectators' seats but actually experience it "backstage" surrounded by many music celebrities. With its prominent guests ranging from artists to the federal president, it is even broadcast live on TV.

The Vienna Philharmonic invites dancers to its ball at the Wiener Musikverein. However, at this event the musicians of this world-famous orchestra can only be found with their instruments during the introduction. Because even the performers of the Vienna Philharmonic want to shake a leg now and then. The sweetest ball is the Bonbon Ball at the Wiener Konzerthaus. This ball is known for its fun and informal ambiance. And at the Vienna Kursalon, the Strauss Brothers once celebrated their greatest accomplishments – where visitors can now dance to the sounds of the waltz at the Johann Strauss Ball. At the Flower Ball, City Hall transforms into a unique sea of flowers.

Everything comes to an end ...

The end of the ball also follows a traditional ritual: the light in the ballroom is dimmed, the band plays a slow waltz as everyone leaves. In Vienna, lively nights at the ball end at a sausage stand or over goulash in a coffee house.

At the Vienna Opera Ball, the Vienna State Opera is transformed into the world’s most famous ballroom. This ball of balls creates opportunities...

More than 150 years ago, Johann "Schani" Strauss made the Vienna Waltz famous around the world. Today, the dreams of millions of ball attendees...

Are balls only about dancing? What about food and drink? We follow two couples at Vienna’s world-famous Opera Ball and take a look behind the...