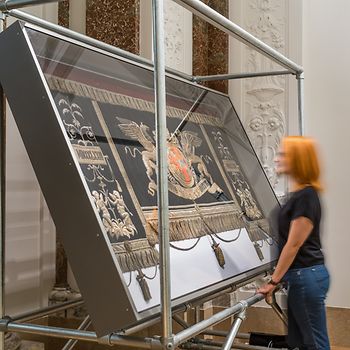 A hundred years after the founding of the First Republic, the new House of Austrian History on Heldenplatz casts light on our country's eventful history after 1918.

Exactly a hundred years after the founding of the First Republic on November 12, 1918, the House of Austrian History opens in Vienna. It is housed in the Neue Burg on Heldenplatz. On a total area of 1,800 m², it vividly depicts the creation of Austria, from the Habsburg monarchy, through the First Republic, annexation to the Third Reich and founding of the Second Republic down to the present day.

The opening exhibition entitled "Aufbruch ins Ungewisse - Österreich seit 1918" (Departure into the Unknown - Austria since 1918) illuminates the contradictory Austrian century in seven themed sections: The founding years of the Republic from 1918 to 1921 are focused on, as are the National Socialist terror, the emergence and change of Austrian consciousness, and the economic miracle after the Second World War. - All topics are presented in a comprehensible and appealing way with the aid of state-of-the-art exhibition technologically. Prominent exhibits include the government bench from the large session hall of the Parliament building as well as the "imperial box curtain", which was also discovered in Parliament in 2017. The historical showpiece designed by the architect Theophil Hansen decorated the box provided for Emperor Franz Joseph in the government building.

The House of Austrian History sees itself as a discussion forum and aims at stimulating debate on the ambivalences of Austrian history in a European and international context. The museum wants to look not only backward but also forward and examine the impact of the past on our present and future.