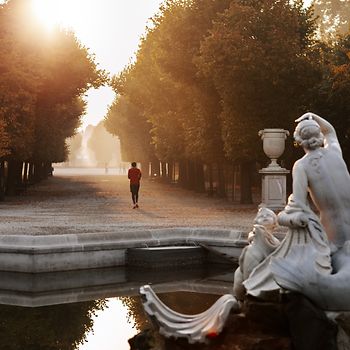 The city can be discovered from another aspect while jogging. Experienced trainers lead you past Vienna’s attractions at a clip.

Endurance and power combined and right in the middle of Vienna? The Tristyle Workout Run trains endurance and power without a single piece of additional equipment. Beginners are also warmly welcome as the endurance phases can be completed both running and walking.

The team of Vienna SightRunning offers four different routes through city on its running tours. Participants can choose between a run through the Old City (classic and extended route), a route from the Wien River to Danube Island, and the final option: a run along the Danube to Kahlenbergerdorf. Individual tours are also put together for groups.

Pulse and running speed can be recorded and assessed on request and training recommendations made. The team is made up entirely of sports scientists. The tours are offered in German and English.

Jogging tours to the best sights are also on the program at runandsee. There are currently ten different routes, such as the classic "The Ring", as well as more unusual ones, such as the Melange route - on the trails of Vienna's coffee house culture - or a "hip and trendy" ShopRun. Of course, fully customized routes are also possible at runandsee.

The guides offer a pleasurable way to discover Vienna in all its different guises and relate interesting anecdotes about the city's history. And in various languages (German, English, Italian, French, Japanese). The program and pace can be tailored to suit and adapted to physical ability. Individual bookings or in small groups (more than 4 people possible by arrangement).

Exciting adventures while delving into the history of the imperial age? If that’s your cup of tea, Vienna offers a very special place: Schönbrunn...

Whether it is the park of the Schönbrunn Palace, the Palace Garden of Belvedere, or the Augarten – the mixture of baroque magnificence and the...