The Viennese cuisine has an excellent reputation. Especially cakes are a class of their own, for instance the famous Malakov Torte. Reportedly, it was created in Vienna in honor of the French marshal Pélissier who was awarded the title Duc de Malakoff after he had successfully defeated the Russian fortress Malakow during Crimea War. The cake’s particularity is that it does not have to be baked. It is a layer cake made from ladyfingers and whipped cream. Simple preparation, high enjoyment!

For the vanilla cream:

For the chocolate cream:

For the cake, mix all the ingredients together with a slotted spoon until smooth. Grease a spring-clip cake form with butter. Pour in the mixture ans bake in a preheated oven at 180 °C (350F) for about 10-12 minutes. Allow to cool, then take off the spring form.
For the vanilla cream, stir the custard powder into 3-4 tablespoons of cold milk. Soak the gelatin in cold water. Heat the rest of the milk with the vanilla pulp, sugar and a pinch of salt. Mix in the custard and stir until the mixture is thick. Remove from the stove, and mix in the drained gelatin with a hand mixer. Cool to room temperature, and then fold in the half-whipped cream.
For the chocolate cream, soak the gelatine, chop up the chocolate and place in a bowl. Heat up the milk and pour over the chocolate. Mix in the drained gelatine with a hand mixer until the mixture becomes elastic. Cool to body temperature, and then fold in the half-whipped cream.
Place the cake in another spring form of the same size. Combine the sugarwater with rum and dribble some over the cake. Warm up the jam and spread over the cake. Then spread about 2 cm of chocolate cream over the jam. Dip the ladyfingers briefly in the soaking mixture and place on top of the chocolate layer. Spread a layer of vanilla cream about 2 cm thick over the ladyfingers and cover again with ladyfingers. Repeat the process until all the creams are used up, and finish with the vanilla cream. Smooth the cream on all sides and allow to cool for about 3 hours.
Carefully remove the cake form, and spread the cake very thinly with whipped cream. Apply the almonds to the sides of the cake. Decorate the top of the cake with cream roses and with optional macaroons or halved ladyfingers. 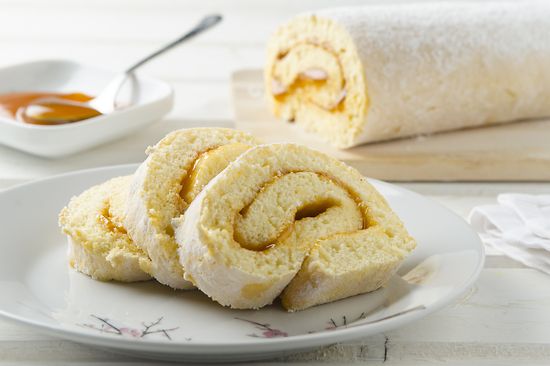 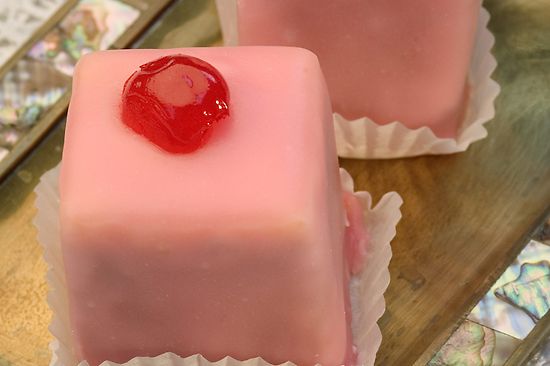 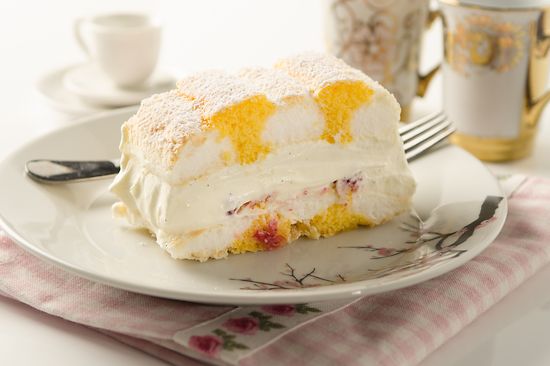 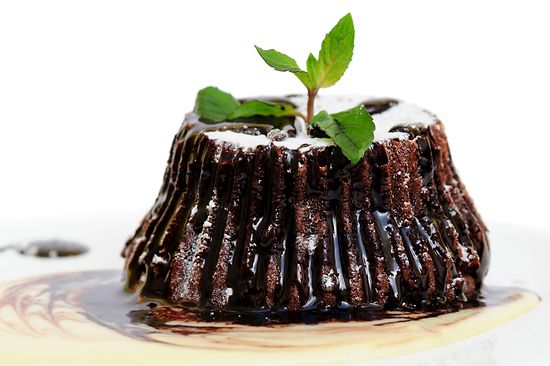 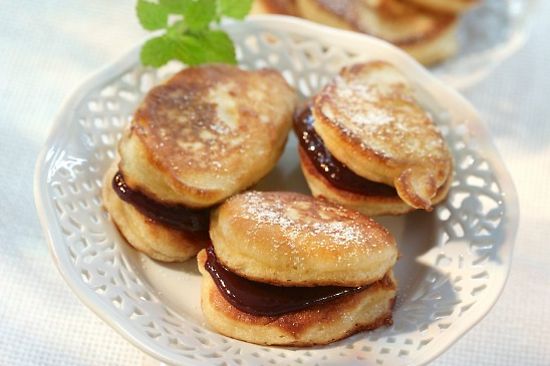 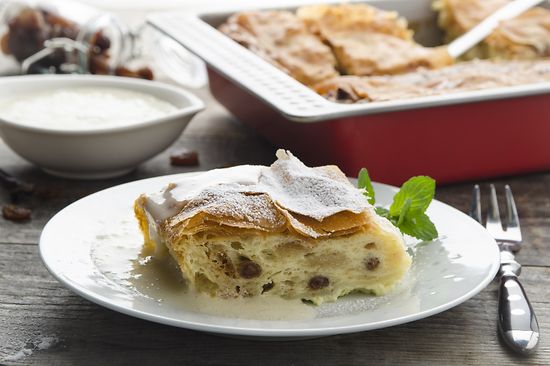 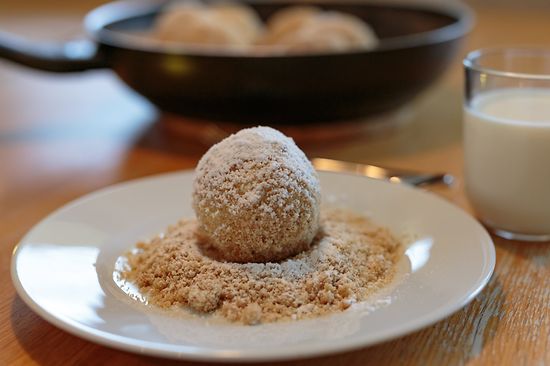 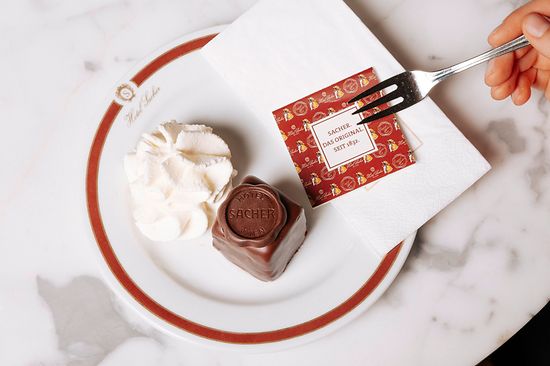 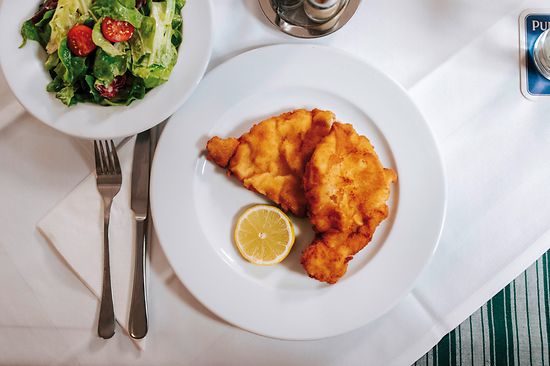 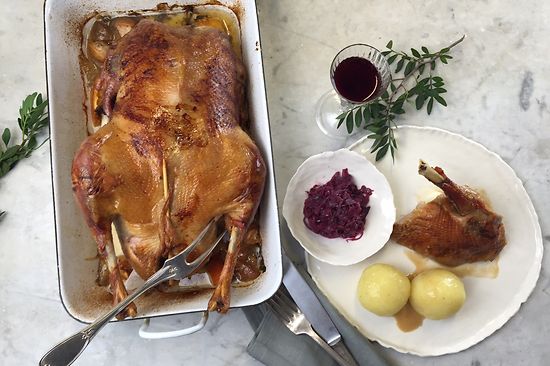 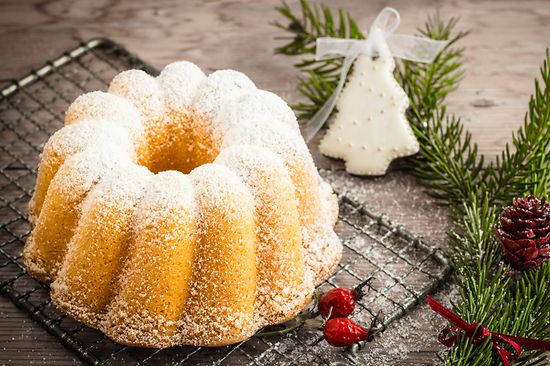 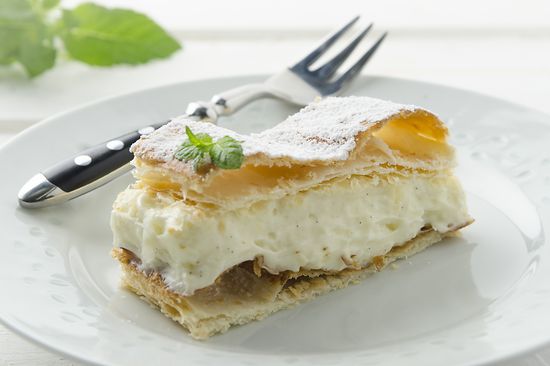