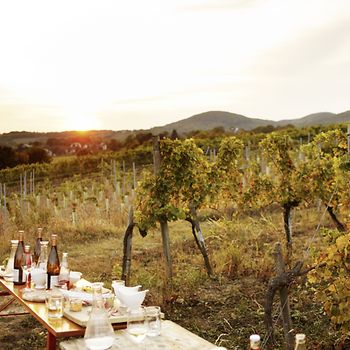 The Kahlenberg is located in the Vienna Woods and is one of the most popular excursion destinations for the city’s residents. This is mainly because of the stunning view afforded by the Kahlenberg: on clear days, one can not only see the entire city from above, but even the Schneeberg, where Vienna’s mountain spring water comes from. Let’s go up to the wonderful view!

The Kahlenberg is 484 metres high and has a long history. It was given as a gift by Emperor Ferdinand II. to the Camaldolese Order in 1628. At the heart of the monastery built there arose St. Josephs' Church. However, the Kahlenberg was actually made famous by Polish King Sobiesky, who marched over the Kahlenberg with his army in 1683 and liberated Vienna at the very last minute from the Turkish occupiers.

Today, the Kahlenberg is above all a popular excursion destination and the top can be reached in about four hours on Vienna's City Hiking Trail 1. At the highest point of the mountain is the Stefaniewarte. This 22 metre-tall viewing tower was built in 1887 and named after Crown Princess Stefanie of Belgium. Just below the summit stands the Baroque St. Joseph's Church, whose black Madonna made it a popular pilgrimage church. From there, you arrive at the panorama terrace, which invites you to stay awhile and gaze down on Vienna. A restaurant and a café offer not only beautiful views, but also Viennese delights. The viewing point on Kahlenberg can also be reached directly from the terminus of tram line D on a short walk.

City hiking trail 1a leads to the neighbouring 425 meter-high Leopoldsberg, the easternmost foothill of the Alps. The Babenberg Count Leopold III had a castle built here in the 12th century, most of which still stands today. A special feature here is the 1.5 kilometre-long Nasenweg with its unique fauna and flora and its impressive view of the Danube.

Those who would prefer not to walk can reach the Kahlenberg in comfort by bus (line 38A from Heiligenstadt via Grinzing) or by car (via Grinzing and the Höhenstrasse).

The Vienna Woods
Hiking in and around Vienna

Vienna's most popular local mountain - Kahlenberg - now has yet another attraction: in the Kahlenberg Forest Rope Park, you can climb, hang...

In the west of Vienna, adjacent to the Vienna Woods, is Schwarzenbergpark. Walking, hiking, flying kites and total relaxation, jogging or...

Vienna has abundant bodies of water that offer a perfect and above all natural alternative to the open-air pools in summer. Surrounded by reeds...