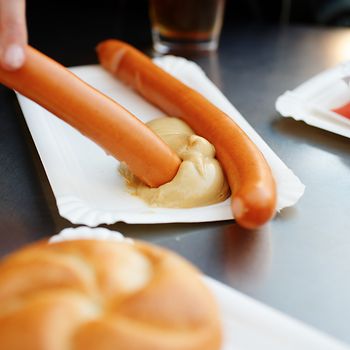 “Sweet (süss) or spicy (scharf)?” is the standard question you will get asked when ordering from a Viennese hot dog stand. This has nothing to do with making a choice between Sachertorte or Käsekrainer, but refers to your mustard preference – whether the mild sweet Kremser or spicy hot Estragon. Incidentally, the Käsekrainer is an Austrian invention and a traditional classic. It is a lightly smoked pork sausage with 10-20% cheese content. The city’s hot dog stands – mostly small sidewalk kiosks – sell not only hot dogs but also wieners, Käsekrainer and fried sausage, and as well as a whole range of culinary surprises. They are complemented by an impressive variety of beverages from raspberry pop to specialty beers.

One of the popular stands is the legendary “Würstelstand am Hohen Markt” located on a traffic island in the heart of Vienna’s old city. During the day it is the ideal place to grab a quick snack while shopping or sightseeing. However, it owes its cult status to its late night opening hours and the diversity of its night owl clientele. It is nothing unusual for bankers to be seen eating shoulder-to-shoulder with punks.

The Bitzinger sausage stands at Albertinaplatz and next to the Giant Ferries Wheel are widely held to be the best in Vienna. Choose between a delicious Bosna, hot dog or Käsekrainer and a range of traditional side orders. Draft beer, bottled wine or champagne are also on.

The "sharpest" sausage stand in the city is called "Zum scharfen Rene". The name says it all. The fine selection of sausages here are served with the sharpest chili mixtures and an award-winning, home-made curry sauce.

Dine like an emperor at the Kaiserzeit Sausage Stand. In addition to the traditional offering of sausages, including the multi-award winning Blunzn (blood sausage), there are also local delicacies such as goulash soup and Altwiener Suppentopf, which you wouldn’t normally expect to find at a sausage stand.

And the Viennese sausage stand is even available with an organic quality seal. The first organically certified sausage stand is located in the 8th district. Particularly popular are the organic sausages and Bosna, also available in a vegan option. You won't see aluminum cans and PET bottles here.

Vienna offers increasing possibilities to live a vegan life totally free from animal products when it comes to food, clothing and other everyday...

The Werkbund Estate combines the great architects of the pioneering age of Modernism like nowhere else in Vienna. Adolf Loos designed plans for...

Visionary and fantastic, but also monumental and sometimes off-beam: Vienna’s 20th- and 21st-centuries architecture offers up a lot of...