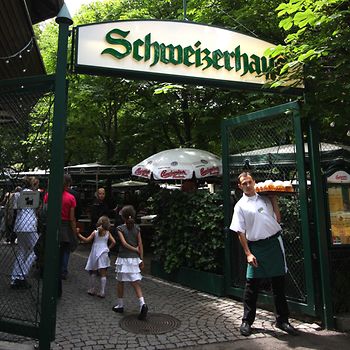 The culinary opportunities of the Vienna Prater are as varied as its many opportunities for entertainment. They range from a simple Kaiser roll with sausage at the snack stand to opulent culinary delights for connoisseurs. Let yourself be pampered.

More than five dozen restaurants can be found in the Prater: from a simple self-service stand where you can buy aromatic Hungarian “langos” to hot-dog stands where one asks for a “Hot One”, i.e. a hot sausage different from the also-ubiquitous hot dog to earthy restaurants – often with live music in the garden, as well as dance restaurants or restaurants for the more discerning taste.

One of the legends of the Prater is the Schweizerhaus (Swiss House) with its giant garden where connoisseurs drink beer in the shade of large old trees and dine on hearty Viennese fare.

Kolariks Luftburg has a lovingly landscaped garden with extensive an terrace and beer garden. The restaurant is known for its family-friendly atmosphere, including outdoor children’s play area, and for its food, which ranges from pork knuckle to spare ribs. Everything is 100% of organic quality

The Rollercoaster Restaurant promises all sorts of fun and entertainment. The food is sent straight to your seat on spectacular rollercoasters. Robots mix cocktails and offer dance interludes to accompany a great light show.

At the Meierei (literally: dairy), you might want to have a Viennese afternoon snack consisting of coffee and a pastry and observe the colorful array of bicyclists, runners, and inline skaters on the main avenue of the Prater, the Prater Hauptallee.

The Altes Jägerhaus (Old Hunting Lodge) also looks back on its imperial past when it served the emperor as stables and living quarters for servants. Today, visitors enjoy creative and ambitious cuisine in a tasteful atmosphere.

Luftburg Kolarik in the Prater

The Motto restaurant has been a hotspot on Vienna’s dining scene for many years. International stars like coming here to mingle with the colorful...

An imperial nostalgia train from the imperial age offers luxurious excursions. Guests are pampered on board with a stylish dinner.

Vienna’s LGBT scene is flourishing. Many establishments make it easy to be part of the “scene” all day long. A selection.