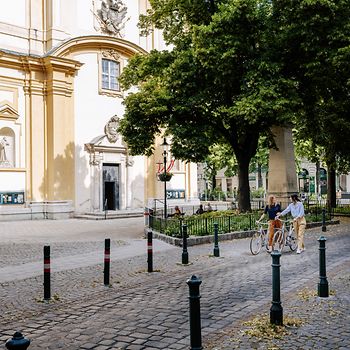 Hardly anyone knows Vienna as well as the certified Viennese tourist guides. So if you think you already know (almost) everything about Vienna, then you should really consider going on one or more tours. It's worth it.

The best way to take a tour of Vienna is with one of the certified guides, who know the city better than the back of their hand. Tourist guides also offer much more than just city tours. They are storytellers, art historians, architecture aficionados, insiders, gourmets, jacks of all trades, and much more besides. A pretty good combination, wouldn't you say?

We have put together a selection of original and exciting tours by Viennese tourist guides for you:

On an architecture tour through Vienna

Out and about in the neighborhood – Vienna for the Viennese

The Viennese love their neighborhood, but do they really know it as well as they think they do? Any gaps in knowledge can be filled on a district tour or neighborhood tour. Interesting not only for Viennese but also for visitors who'd like to take a really close look at their favorite district or other unknown districts.

Known, loved and famous for its picturesque Christmas market in winter, the Spittelberg and its wonderful Biedermeier houses can look back over a literally moving history. Previously also called the "Venusberg", establishments of somewhat dubious repute once existed here, in today's 7th district. With so many spicy details, you can satisfy your hunger in one of the numerous restaurants on the Spittelberg.

Fancy a coffee? Or two?

Perhaps you'd like a Melange or an Einspänner in between? The sweet side of Vienna can definitely be experienced over coffee and cake. Tourist guides have a few stories to tell about the city's legendary coffee houses.

Concealed corners with edges – and a lot of history

In Vienna, you'll stroll along convoluted and concealed paths: on this tour, you'll dive deep into hidden Vienna, which lets us dream of times long past with its enchanted stories. From Blutgasse (Blood Lane) via the Greek quarter to the old university quarter.

Death must be a Viennese

People like dying in Vienna. That may sound comical, but people here connect death with far more than grief. Things are likely to get a bit morbid. That's no surprise, because you can walk on guided tours through notorious cemeteries (Central Cemetery) as well as through enchanted final resting places (Cemetery of the Nameless).

What would Vienna be without its Jewish population? On a guided tour through Jewish Vienna, you'll naturally learn all sorts of things about Viennese Jewry over the course of history, but also that the 2nd district was once called "Mazzesinsel". The area is still home to kosher supermarkets, butchers, and bakers, which pamper the palate with Jewish specialties.

The little ones on a great tour of discovery

Vienna is a big deal even for the little ones: From dragons and unicorns to Wolfie and Nannerl, from animal city life to imperial sweets. A city holiday with children is really fun with the right programme. In this way the kids, but also their parents, get to know Vienna in a playful way.

An overview of the tours:

Or you can find many other guided tours at Guides in Vienna or your very personal guide to Vienna here.