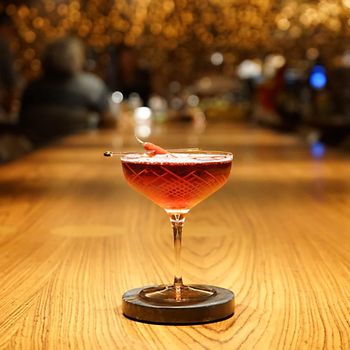 The bar scene in Vienna is known for its hospitality and high quality, and is just as diverse as the city itself.

The bar scene in Vienna is known for its high quality. In the past ten years there has been an incredible boom in new venues – from the classic American Bar to trendy concept bars. The range of cocktails, long drinks and spirits is considerable; each bar has its specialties and signature drinks. The design of the bars is also quite impressive. Not to mention the numerous hotel bars which serve not only their own hotel guests special drinks.

One of these special hotel bars is the Lvdwig Bar in the boutique-style Hotel Beethoven, right near the Theater an der Wien. This is where Isabella Lombardo, chosen by Falstaff as barwoman of the year 2021, designs her sophisticated cocktail creations. She finds inspiration for her drinks in Vienna. Not only is Ludwig van Beethoven, the hotel's namesake, the idea behind a drink, but so is the Secession, and the Suffragettes, the strong women around the turn of the 20th century. The interior of the Lvdwig Bar, which opened in January 2020, was designed by the famous architect Gregor Eichinger. An eye-catcher is a long communal table, built as an extension of the bar.

There is also a new bar at the Hilton Vienna Park. The name of the new Selleny's Bar goes back to the creator of Vienna's Stadtpark, which lies right opposite the hotel. The bar not only offers fantastic cocktails and sophisticated signature drinks, but is also a great place to eat. Quite surprisingly even with raw food. And also during the day. Which brings us straight to the next trend – the daytime bars.

The early closing times during the coronavirus pandemic forced many bars to open during the day instead – like Everbody’s Darling, a smart daytime bar in the extension of the Tuchlauben luxury shopping area in the Goldenes Quartier. And many bars have also opened sidewalk cafés. For example, the Lvdwig Bar mentioned above has a great dining garden, as do the two Roberto American Bars or the R&Bar. What else do these bars have in common? Award-winning bar food.

Another tip for extraordinary bars: the boutique bar Tür 7,  the restaurant bar Bruder and the Kleinod Bar were included on the list of World's 50 Best Discovery. This new ranking was published for the first time in 2020 by the organization "World's 50 Best Restaurants & Bars".

Other recommendations for Vienna's bar scene:

Viennese cuisine is seasoned with the ingredients of the imperial and royal monarchy and sweetened with the famous Viennese pastries and cakes.

Vienna and cafés. Naturally enough everyone immediately thinks of a venerable old Viennese coffeehouse. And there are plenty of them in the city...